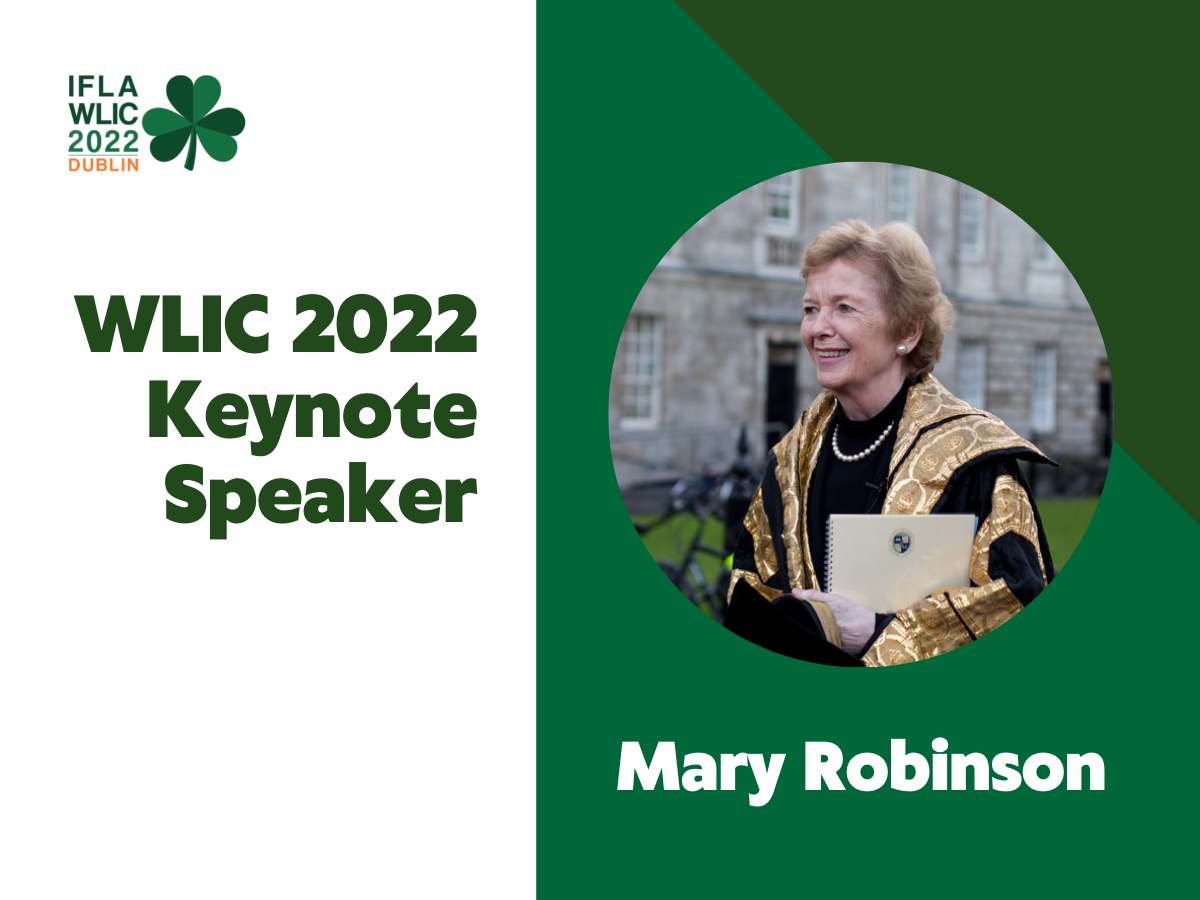 In line with our Congress theme of Inspire, Engage, Enable, Connect, IFLA is delighted to announce that Mary Robinson will present the keynote address at the opening ceremony on 26 July in Dublin. The session will be live streamed and include translation into all official IFLA languages.

Mary Robinson is Adjunct Professor for Climate Justice in Trinity College Dublin and Chair of The Elders.  She served as President of Ireland from 1990-1997 and UN High Commissioner for Human Rights from 1997-2002. She is a member of the Club of Madrid and the recipient of numerous honours and awards, including the Presidential Medal of Freedom from U.S. President Barack Obama. Between 2013 and 2016, Mary served as the UN Secretary General’s Special Envoy in three roles; first for the Great Lakes region of Africa, then on Climate Change leading up to the Paris Agreement and in 2016 as his Special Envoy on El Niño and Climate. Her Foundation, the Mary Robinson Foundation – Climate Justice, established in 2010, came to a planned end in April 2019.

A former President of the International Commission of Jurists and former chair of the Council of Women World Leaders she was President and founder of Realizing Rights: The Ethical Globalization Initiative from 2002-2010 and served as Honorary President of Oxfam International from 2002-2012. She was Chancellor of the University of Dublin from 1998 to 2019.

Mary Robinson now serves as Patron of the International Science Council and Patron of the Board of the Institute of Human Rights and Business, is an Ambassador for The B Team, in addition to being a board member of several organisations including the Mo Ibrahim Foundation and the Aurora Foundation. Recently she became joint Honorary President of the Africa Europe Foundation. Mary’s memoir, ‘Everybody Matters’ was published in September 2012 and her book, ‘Climate Justice – Hope, Resilience and the Fight for a Sustainable Future’ was published in September 2018. She is also co-host of a podcast on the climate crisis, called ‘Mothers of Invention’.

If you haven’t already registered for IFLA WLIC 2022, it’s not too late!  Visit our Congress Registration Information webpage for full details.